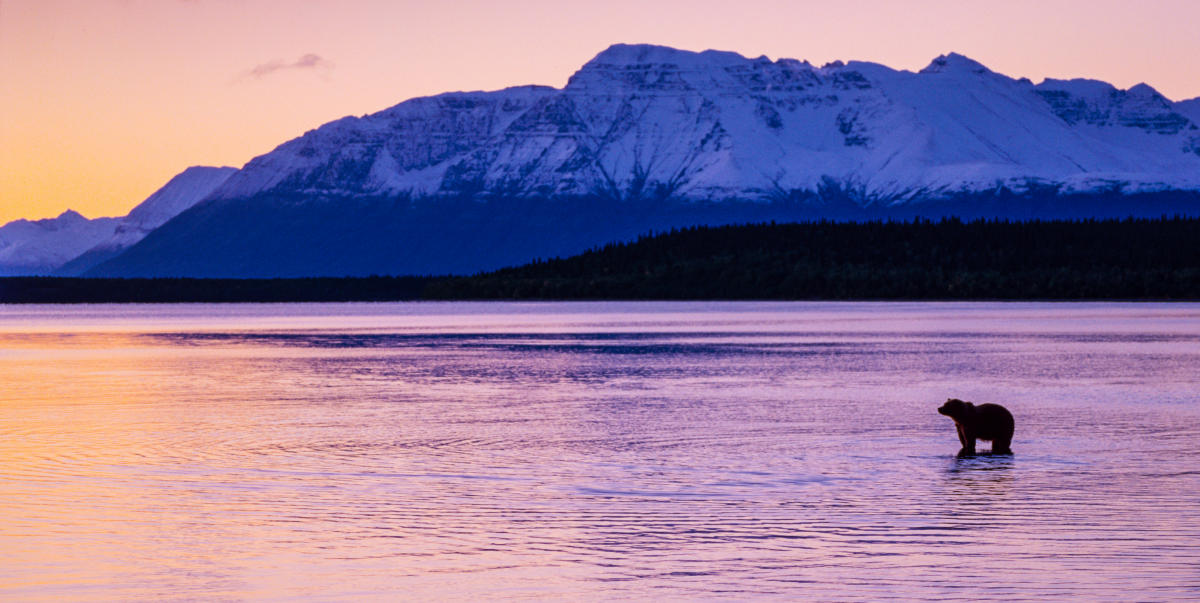 I still don't believe this photograph. It was about 10 pm in September in Katmai National Park. I had just eaten and only had my Leica R6 with a 60mm lens on me as I sat outside watching the last light, when this bear walked into the scene. Nak Nek lake is very shallow at this spot and she was feeling for salmon carcasses. I set as slow a shutter speed that I felt comfortable with, opened the aperture to f/2.8 and rested the camera on my knee. The film speed was ASA (ISO) 50, so it was going to be a long exposure. Just as I got ready to make an exposure she paused and looked up, as if to ponder the beauty of it all. I made the exposure. This won Best of Show in a national competition judged by Art Wolfe, who handed the award to me on stage in a ceremony in Seattle. It was also the first time I used digital manipulation, since the competition allowed it. They wanted digital submissions, which was new to me, so I had it professionally drum scanned and bought a relatively new software program called Photoshop to prepare the "file" to the required specifications. The original slide had only 5 stops of latitude, which washed out the sky and cast deep shadows. I was able to lift the shadows a little and restore color in the sky. Even so, I felt guilty about it and was sure the Truth Police were going to come get me. But nothing was created that wasn't already in the scene, just beyond the capability of film to record. This photograph reflects my particular ethic about landscape and wildlife photography, that the image should faithfully record what I saw, within the limits of the medium. The beauty is in Nature, not in the software. And since I'm partially color-blind, the colors may seem a little off.